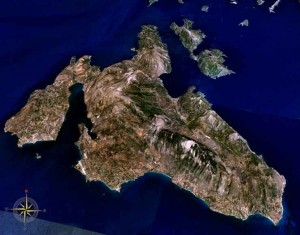 Kefalonia is the sixth largest island of Greece, covering an area of 786 square km. It is the largest island in the Ionian Sea while it comes second as far as its population is concerned, since there are 36,527 inhabitants (census 2001). The capital of the prefecture Kefalonia and Ithaki is Argostoli, since 1757. The annexation of the Ionian Islands in Greece became on 21 May 1864. The island suffered severe damage from the powerful earthquake in 1953, when it was nearly leveled, but a few years later it was rebuilt by the residents and nowadays, it faces rapid development in tourism.
It is called the ‘island of whimsy’, due to the number of unusual events recorded on the island. The coastline which is 254km long, reveals a rich horizontal division. Strips of land penetrate the sea, forming the peninsulas of Palikis in the west side and of Elios-Pronni on the north side, where the sea forms broad bays. The main harbours are Sami, in front of Ithaki, and Argostoli, in the west, which was the ancient natural strategic naval base. The bays of Mirtos and of Athera in the north and Lourdata and Kateleiou in the south are known for their enchanting beaches that attract many visitors each year. The geological events of the island are the sinks, the cave of Drogarati and lake-cave of Melissani.
. The name Kefalinia as it was called by Herodotus came from Kefalanes, who were people from Western Greece. The turbulent history of the island, however, brought large fluctuations in its population,and was followed by an intense internal migration to urban centers.
As far as the attractions are concerned, the most important sights are the Archaeological Museum of Argostoli, the Naval and Environmental Museum of Fiskardo, with information on the history of the island, the marine life and the natural beauty, the Natural History Museum of Kefalonia and Ithaki,at Daygata, the ecclesiastical Museum of Holy Monastery of Saint Andrea Milapidia, where there are exposed ecclesiastical heirlooms,paintings, pictures and murals and the Monastery of Saint Gerasimos (or New Jerusalem). The wines produced in the island are part of the tradition of Kefalonia, with Rompola being the most prominent variety of wine, while the cuisine includes well known, traditional dishes of Kefalonia, such as pastitsada and aliada.

A member of our staff is dedicated to your service on a 24-hour basis, responding effectively at the shortest notice.